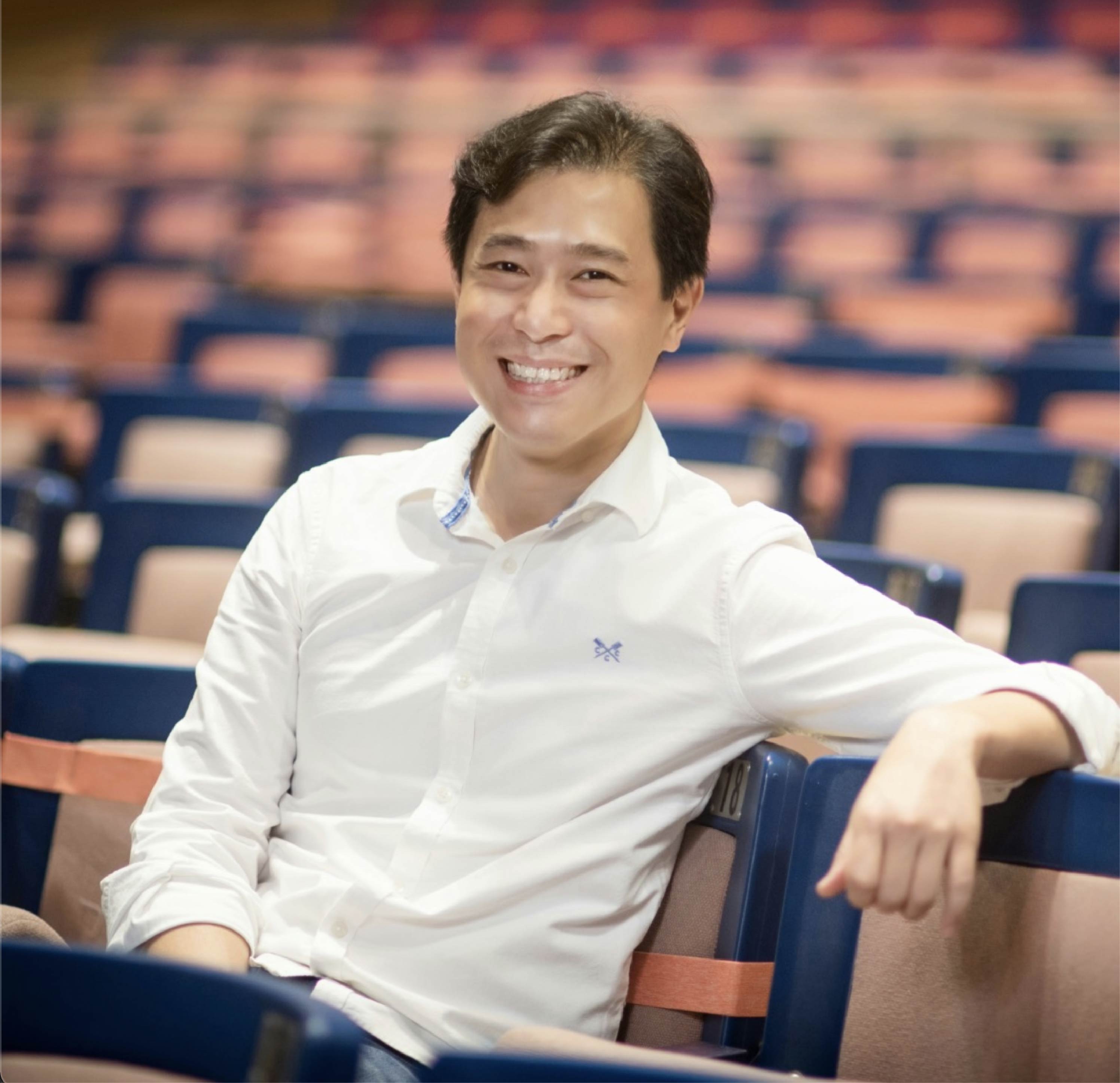 “I was gonna call it ‘One Month One Drama’, but Ribble proposed to broaden ‘Drama’ into ‘Art’. We often hear an apple a day, eight glasses of water daily, a weekly Green Monday – why not an art each month then?” Finishing his sentence in one breath, the energetic Winton turns towards Ribble.

“I wasn’t this outgoing a decade ago – now I’m even younger than before!” Prof Winton Au of CUHK Department of Psychology chuckles. His secret to becoming young again? Nothing magical, “just engaging in performing arts, really. I underwent a transformation from being shy to being assured, then bold.” His high spirits are palpable and contagious.

A Hongkonger born and bred, Winton went to the USA in 1989 for his undergraduate studies. He joined CUHK in 1997 after obtaining a PhD in Psychology at the University of Illinois at Urbana-Champaign, “happened to be these two particular years.” He isn’t lecturing us on psychology today though – we are intrigued by his peculiar choice of “extra-curricular activities”. This obviously includes One Month One Art (1M1A), the social enterprise he founded with Ribble Chung (theatre veteran/Arts Administrator at CUHK). 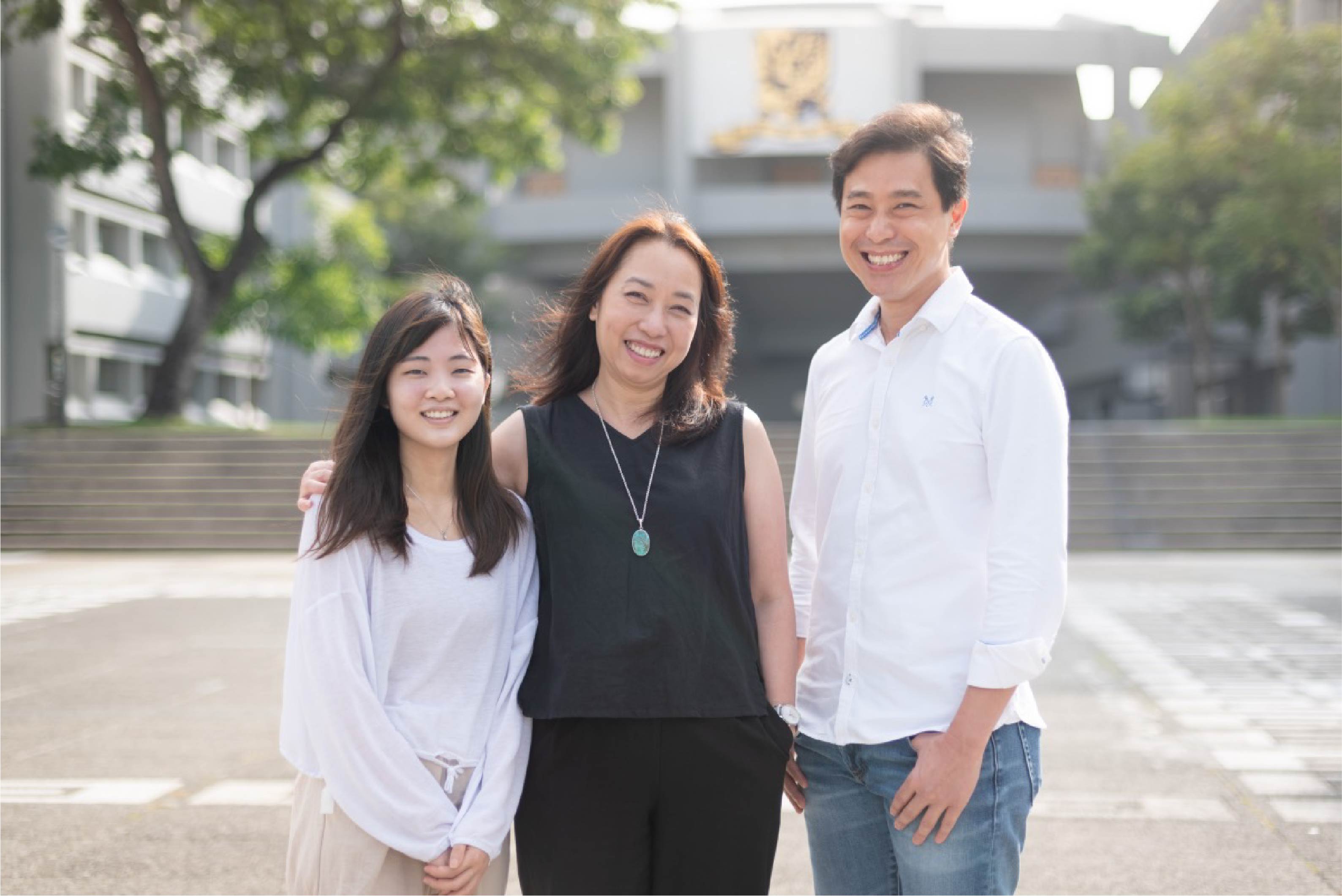 Whereas Ribble showed an affinity for arts since a young age, Winton stumbled across the field at a later juncture.

“It was 2006. I was hunting for hobbies – even things like zi wei dou shu (Chinese astrology) and face-reading, anything but psychology.” That was his ninth year teaching at CUHK. His research focuses on industrial-organisational (IO) psychology, i.e. psychological applications in workplaces, “the personality and aptitude tests you take at job interviews are developed by us IO psychologists.”

Joking that it was his midlife crisis, he intentionally looked for a new pastime beyond his roles as professor and consultant – ideally something entirely unrelated. “Are you sure drama and psychology are unrelated?” Ribble chimes in with a laugh. “Well, I couldn’t make the connection at first.” As Winton’s commitment towards his newfound interest bloomed, he began researching psychology in the context of theatre.

“Chanced across an acting course at the Hong Kong Academy for Performing Arts (HKAPA) and applied for it. I brought a notebook in my first class, turned out we had to take our shoes off and run around the entire time.” His first theatre teacher was the famous Chan Wing Chuen, a first-batch graduate at HKAPA. 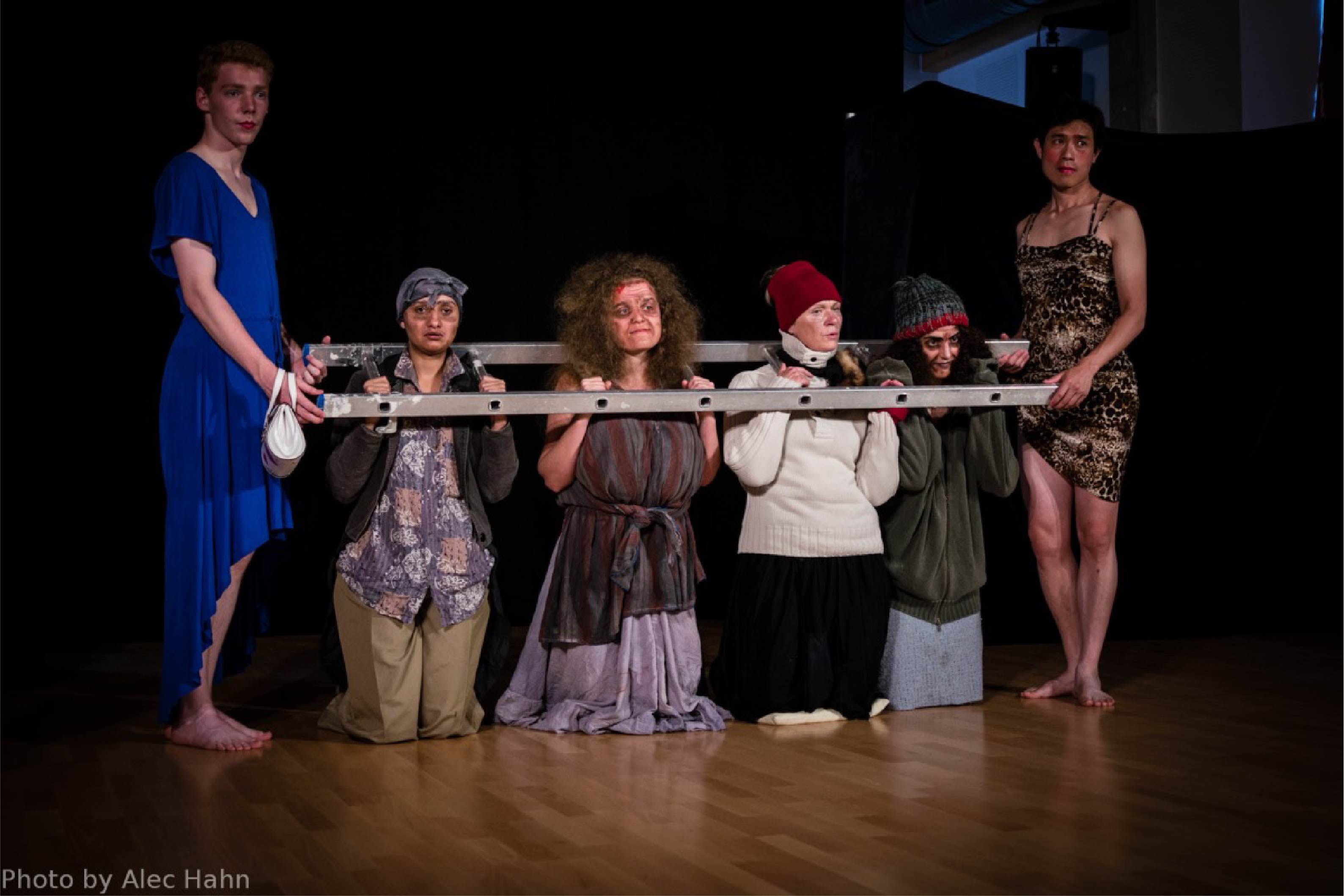 Winton took multiple courses under Chan Wing Chuen, on top of furthering his skills in France and the USA. He stresses that he learned more about appreciating theatre and communicating with his inner self than acting techniques.

“As a professor and consultant, I need my emotional state relatively stable. Practising drama prompts me to be more genuine and loyal to my feelings. So, I used to be reserved, later confident, now bold; it was a distinct evolution.”

What started as self-entertainment became an integral part of his job in 2014. “Chan Kin Bun (ex-Executive Director of Hong Kong Repertory Theatre) was eager to support my research on audience experience.” Having chatted with various troupes and around 30 theatre personnel, he found the industry’s greatest wish to simply be having a live audience. This sparked the idea of founding a cross-troupe promotional platform.

“Everyone underscores the need for such a platform, but nobody initiates. In that case, let us!” The plan was in the making for a few years; the team eventually received support from the Sustainable Knowledge Transfer Project Fund (S-KPF) to set up social enterpriseOne Month One Art this March. 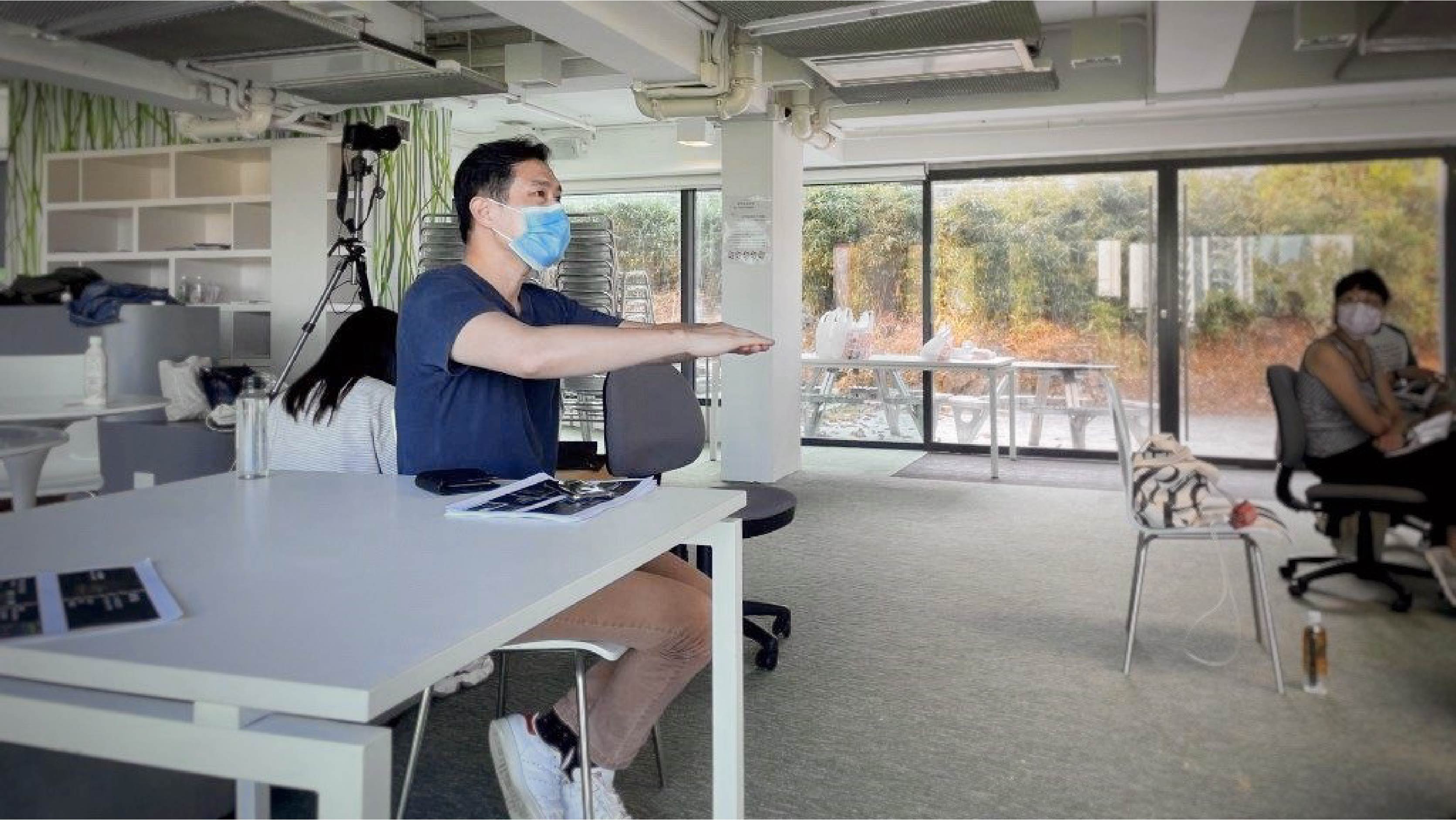 Winton confesses to have been significantly transformed by theatre, hence his eagerness to promote this art form. (Photo: SoCUBE)

“Theatre is a process of enlightenment.”

“I was gonna call it ‘One Month One Drama’, but Ribble proposed to broaden ‘Drama’ into ‘Art’. We often hear an apple a day, eight glasses of water daily, a weekly Green Monday – why not an art each month then?” Finishing his sentence in one breath, the energetic Winton turns towards Ribble.

A seasoned arts administrator, Ribble has experience as programme director and excels at actualising ideas. For 1M1A’s inaugural docent training programme, the duo turned to friendly names across the industry and designed 18 workshops on theatre development, operations, genres and stage aesthetics. They wish to train drama enthusiasts as docents who would drive the culture of art appreciation in the long run.

“Theatre is not only a show – through the art, you ponder questions about the society and yourself. It is an enlightenment process.” Ribble has been enchanted by performing arts since small; she played drama in secondary school, studied stage design at university in the UK, and has worked in the field since returning to Hong Kong. She travels pretty much for the sole purpose of art appreciation, “there’s a fire in my heart,” she confirms her unwavering passion. 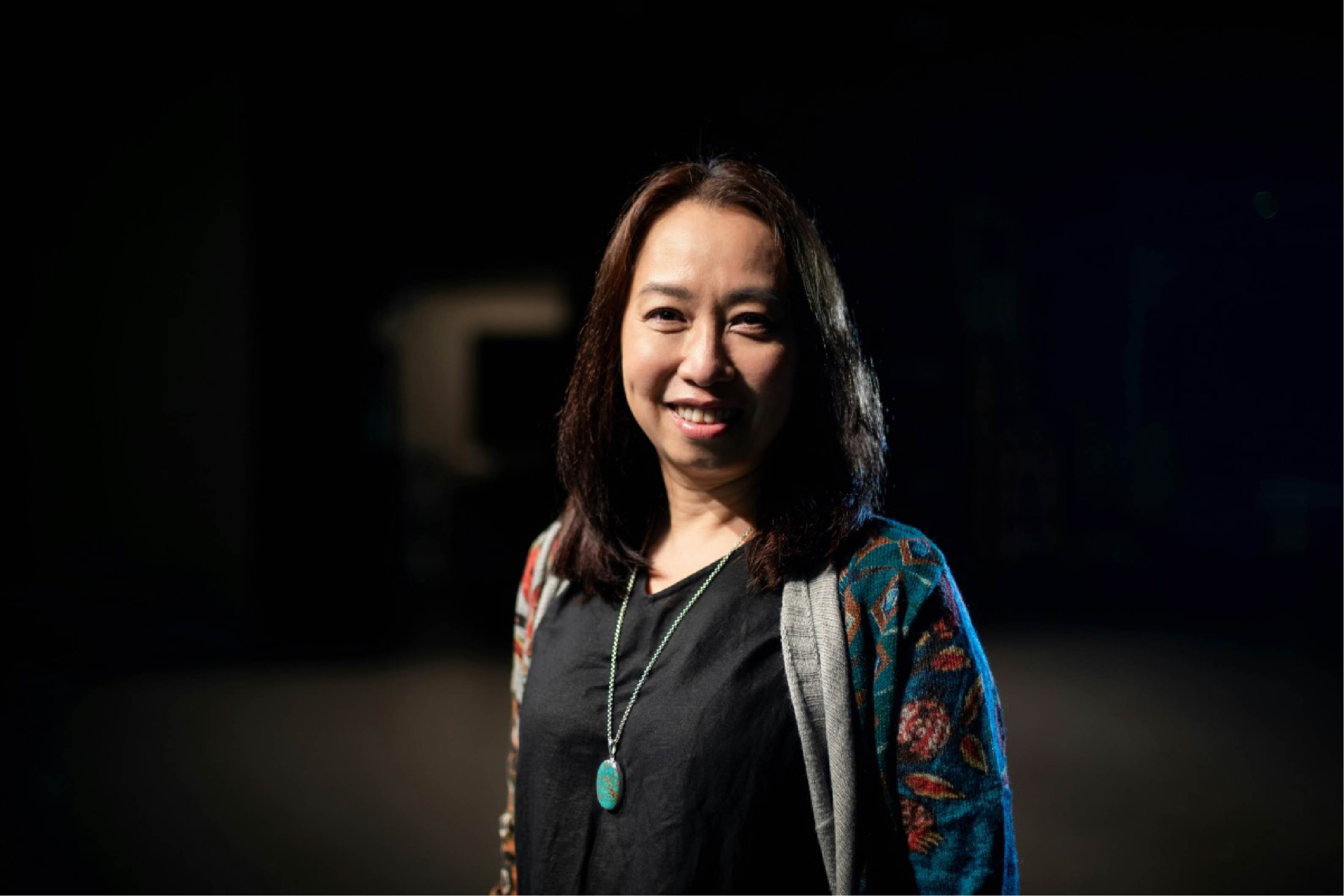 Ribble believes that arts and aesthetic education encourage self-acceptance in children and their appreciation of uniqueness in each person. (Photo: SoCUBE)

“I’ve watched ALL works you had a part in, only three, no?” Ribble laughs.

“I had other smaller performances!” Winton protests. Which of those is the most memorable then?

Ribble commends Oleanna (written by American playwright David Mamet) in which Winton once starred. The play portrays a professor (played by Winton) who’s accused of sexual harassment by his female student; each stuck to their own version. “Brilliant! Only two characters throughout, both with convincing arguments. What an impressive script!” 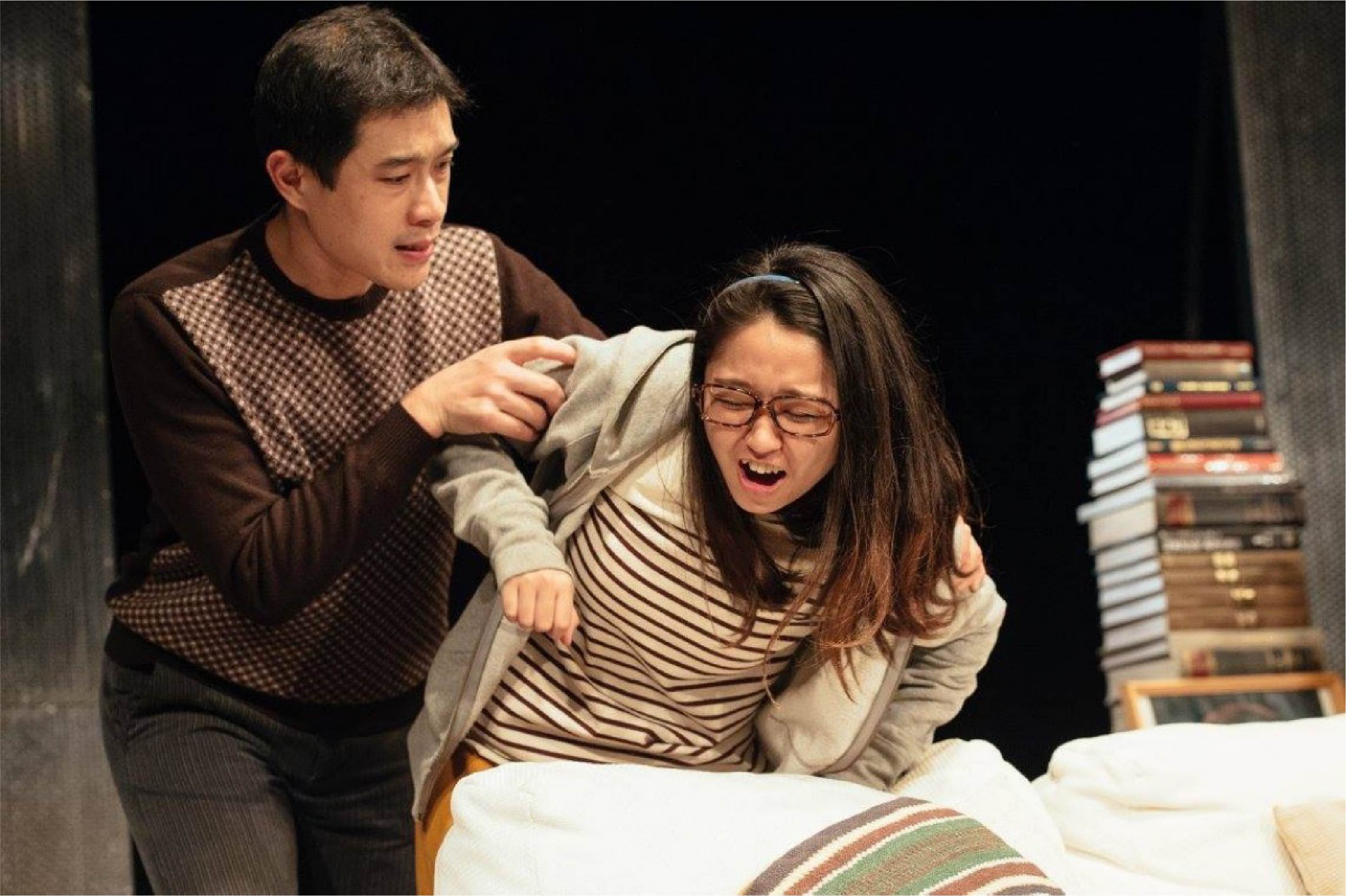 Winton was the protagonist for Oleanna in 2014. (Photo provided by Prof Winton Au)

“Hong Kong is not a cultural desert, but a spiritual one.”

While Winton delights in being his other self on stage, Ribble occupies herself at the backstage. “Unlike him, I have little desire to perform.” She has taken up various roles in the industry, “been employed in the Arts Development Council, also elected a Council Member before.” The two-fold experiences equipped her with a more comprehensive grasp of the ecosystem.

She is straightforward about the shape of the local industry. “One show, a budget of several tens of thousands, while actors are underpaid, earning maybe twenty to thirty thousand over two months. Many work multiple jobs to support themselves; this worsens amid the epidemic.” The plight hasn’t cropped up only this year or two. At the end of the day, it is the society’s overemphasis on money as an indicator of success.

“Hong Kong is not a cultural desert, just a spiritual one. It is to do with the society’s value system. Kids are paid to learn painting and instruments, though how many parents are supportive of them taking on such careers, worried if they could make a living? (which sadly is a legitimate concern). It’s been the same for too many decades.” Ribble illustrates the disheartening vicious cycle, though stressing that there are still many passionate people joining her ranks. While reality may be harsh, hope is not lost.

How may a healthy ecosystem be nurtured? Ribble deems childhood education of essence. “Take the UK as an example. Kids have plenty of exposure to arts; families see orchestral and theatrical performances as grand occasions to partake in. I have participated in an inter-county children’s arts festival in the USA. It was hugely supported by governments and schools alike, full of dances, drama and musical performances, even kids’ storytelling sessions. I absolutely enjoyed my time there as an adult.”

1M1A’s inaugural programme; each session is hosted by a master in his or her speciality. The whole course cost HK$3,000 and was almost immediately full upon its launch. (Figure: 1M1A)

Remoulding value systems and cultures take time; the most urgent question art groups need answering is how to draw audiences. Winton reveals 1M1A’s promotion strategy, “the docent programme expands two tiers of audiences – those interested in performing arts to begin with, and their friends who are unfamiliar with these art forms.”

The author took part in a session hosted by composer Lau Wing Tao, during which he played a clip from his recent work A Tale of the Southern Sky . The soul-stirring music, sound effects and story excerpt almost urged me to get a ticket right away. While I scrolled on my phone in search of drama recommendations, others took notes attentively. Some were reporters, others teachers, social workers, as well as actors and backstage staff. One even quitted her job at a bank to study screenwriting. 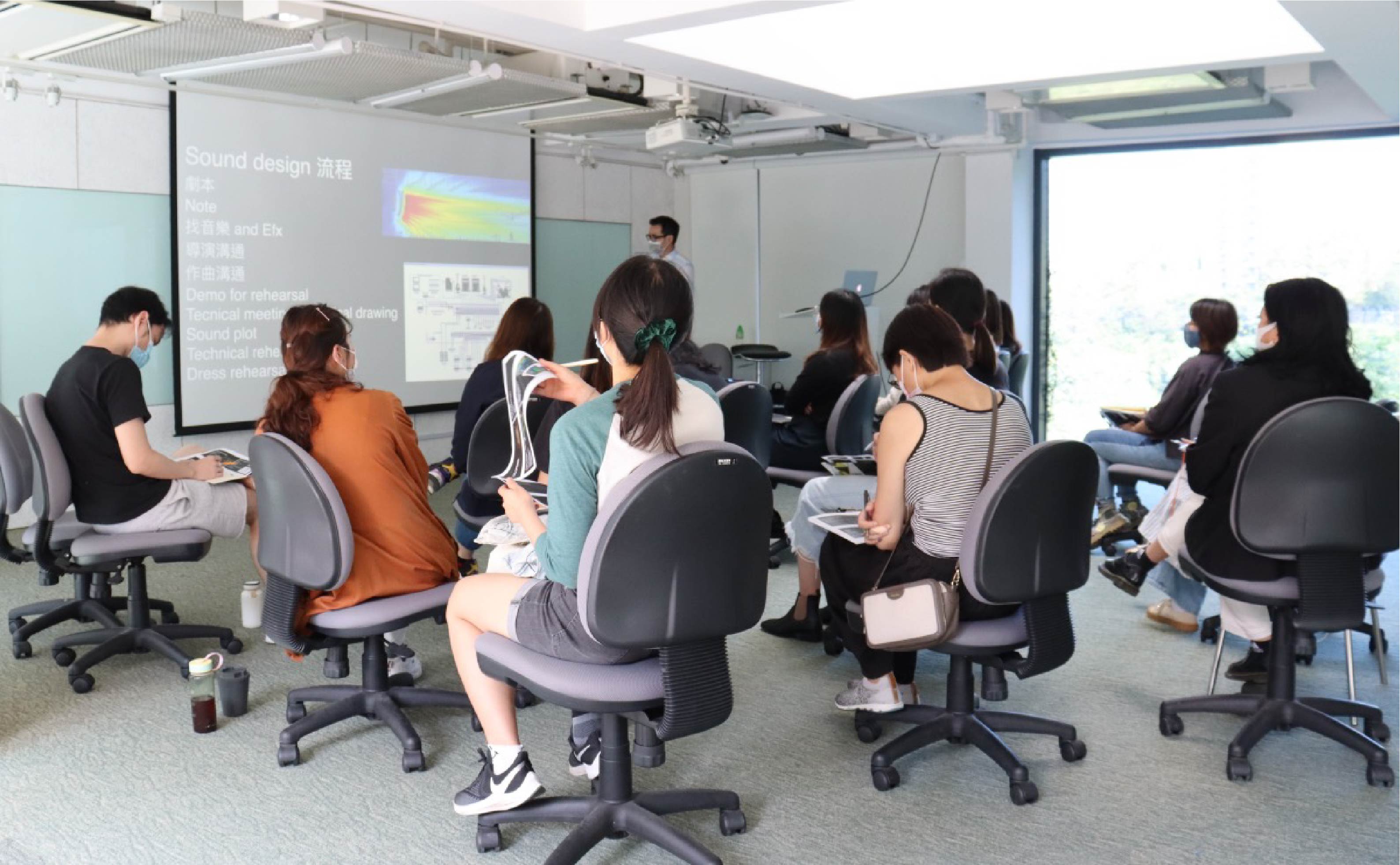 A session in 1M1A’s docent course hosted by Lau Wing Tao, whereas Winton acted as course coordinator, giving participants lifts into and out of CUHK on top of taking pics. (Photo: SoCUBE)

“Over 60 registrants, including someone from Macau; we took in around 20.” Ribble attributes the satisfactory response to Jackie, 1M1A’s recent full-time hire who just graduated from CUHK’s cultural management programme. “‘Cos we’ve invited many masters, and they each got their fan base,” Jackie explains shyly.

Besides training courses, Winton’s team is planning to design an app where audience members may collect points for joining art events and redeem prizes. “Some funding support would be great!”

“The influence of arts is eventually about personal growth.” Specialised in audience experience, Winton lists four dimensions in analysing audience reception – emotional resonance, cognitive stimulation, sensational excitement, and collective experience. “Why visit a theatre instead of watching the show on DVD? Because you get to share the experience as a group.”